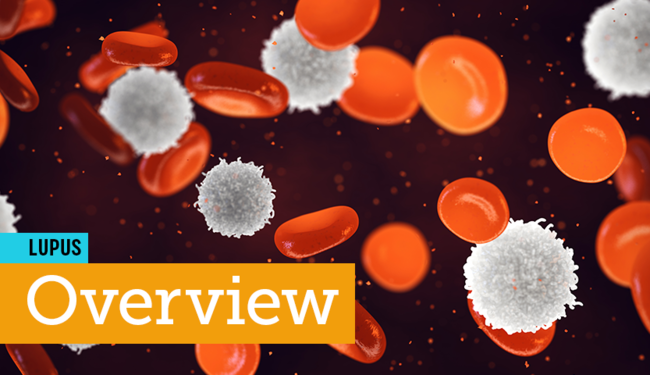 Lupus erythematosus, or lupus, is a chronic disease in which inflammation can attack and damage any part of the body. Lupus can be treated, but there is no cure. Symptoms vary among people with lupus, but fatigue, facial rash (called malar rash), joint pain and swelling, and fever are among the most common. Some people with lupus develop disability and become unable to work. Around 80 percent to 90 percent of people with lupus live a normal lifespan, but severe cases of lupus can be life-threatening.

Lupus is an autoimmune disease. In other words, the damage in lupus is caused by the body’s immune system attacking its own tissues, causing inflammation and damage. Lupus can attack any type of tissue or organ. Common targets of lupus include the skin and joints. In severe cases, lupus can attack the kidneys, heart, brain, nerves, and blood vessels.

Most people with lupus experience periods of increased disease activity called flares, during which worsening inflammation causes more intense or new symptoms depending on where the inflammation is happening. Between flares, symptoms may improve or disappear. Triggers for lupus flares differ between people, but common triggers include:

There are several types of lupus, and lupus symptoms are different for each person. Some types of lupus are limited to the skin, while systemic lupus erythematosus (SLE) attacks other types of tissues. The type of lupus a person is diagnosed with can change over time.

The History of Lupus

Writings by the Greek doctor Hippocrates described lupus-like ulcers several hundred years before the common era. The word “lupus” was first applied to a skin disease by Herbernus of Tours in 916 C.E. Lupus, which is Latin for “wolf,” may have been chosen because the distinctive malar rash reminded doctors of a wolf bite, or because it resembled the facial markings of a wolf.

In 1872, Hungarian dermatologist Moritz Kaposi first differentiated between discoid (affecting the skin) and systemic (affecting other parts of the body) forms of lupus. Kaposi was the first to describe lupus as a systemic disease, associating it with joint pain, fever, and nervous system involvement that could be life-threatening.

Thomas Payne, an English physician, first tried quinine (an antimalarial) as a treatment for lupus in 1894. Payne also theorized that lupus could affect the blood vessels. Over the turn of the century, Canadian physician Sir William Osler wrote one of the first complete papers on lupus. Osler described disease flares and explained how lupus could affect different organs and systems.

Through the 1920s and 1930s, researchers improved their knowledge and descriptions of the disease process in lupus. In 1948, Mayo Clinic pathologist Malcolm Hargraves identified the lupus erythematosus (LE) cell, making it easier to diagnose milder cases of systemic lupus. Also at the Mayo Clinic, Philip Hench isolated the hormone cortisol and demonstrated that corticosteroids can effectively treat lupus — winning a Nobel Prize in 1950 for his efforts.

In the 1950s, two more biologic markers of lupus were discovered, further improving lupus diagnosis. George Friou of the University of Southern California identified the antinuclear antibody, and researchers Cobum and Moore at Johns Hopkins established that many people with lupus produce a false positive result when a syphilis test is administered. These discoveries led to the identification of anti-double stranded DNA (anti-dsDNA) antibodies, another useful diagnostic test for lupus.

In the second half of the 20th century, researchers developed animal models of lupus that helped define lupus as an autoimmune disease. Investigating versions of lupus in mice and other animals also helped scientists understand genetic links that contribute to the development of lupus.

Since the 1990s, lupus research has focused on bringing more and better treatments to market. In 2010, the Lupus Foundation of America called a meeting to define “disease flare.” The resulting definition makes it possible for doctors to more accurately describe disease and researchers a way to begin studying whether new drugs can prevent or limit flares. In 2011, Benlysta (belimumab) was approved by the Food and Drug Administration (FDA), making it the first new drug approved to treat lupus in more than 50 years.

How Common Is Lupus?

Approximately 1.5 Americans and 5 million people worldwide have lupus. About 90 percent of people with lupus are women. Black, Hispanic, Asian, and Native American women are two to three times more likely to develop lupus than white women. Most people with lupus develop their first symptoms between the ages of 15 and 44 — childbearing age for women.

How Does Lupus Progress?

Lupus is a highly individualized disease. In mild cases, medication holds lupus in check, and symptoms do not progress, or they progress very slowly. However, permanent damage can accumulate over time; how the damage manifests depends on which tissues lupus attacks. Some severe cases of lupus progress quickly.

You're in! Thanks for subscribing!

Easily manage your subscription from the emails themselves.

Kelly Crumrin is a senior editor at MyHealthTeam and leads the creation of content that educates and empowers people with chronic illnesses. Learn more about her here.

Lupus: The Path to Diagnosis

The main types of lupus are categorized by the primary signs and symptoms in each case. In lupus,...

The main types of lupus are categorized by the primary signs and symptoms in each case. In lupus,...
read article >

About half of adults with lupus will develop lupus nephritis, a kidney condition that affects...

About half of adults with lupus will develop lupus nephritis, a kidney condition that affects...
read article >

The symptoms of lupus nephritis are associated with the kidney damage that occurs during the...

The symptoms of lupus nephritis are associated with the kidney damage that occurs during the...
read article >

Thank you for signing up.