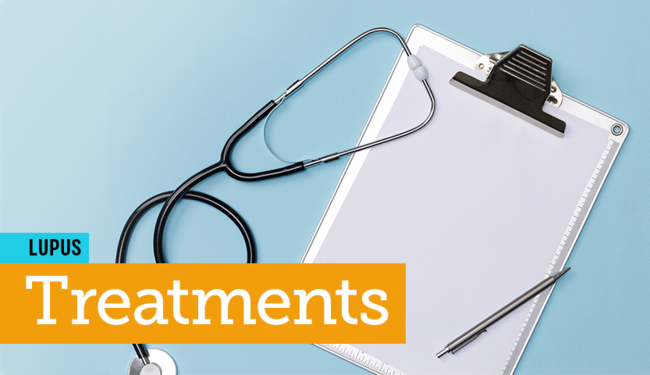 Lupus treatments fall into two main categories: Disease-modifying medications and medications for managing lupus symptoms. Since lupus can cause such a wide variety of symptoms, many different classes of drugs are used to treat it. A few drugs are specifically approved by the Food and Drug Administration (FDA) for lupus, but several drugs approved for other conditions are commonly prescribed off-label to treat lupus.

Guidelines for lupus medications are based on the severity of the disease, which organs or tissues are involved, the age and overall health of the patient, and any other health conditions or medications being taken.

Types of Treatments for Lupus

NSAIDs can ease fever and mild pain and inflammation. Some NSAIDs such as Aspirin, Motrin (Ibuprofen), and Naproxen are available over the counter, while Celebrex (Celecoxib) and Indocin (Indomethacin) require a prescription. NSAIDs are believed to work by inhibiting the production of chemicals that promote inflammation and blood clot formation in the body. Taken regularly at high doses, some NSAIDs can cause gastrointestinal problems and abnormal bleeding.

In lupus, the body’s immune system attacks tissues and organs, causing inflammation, damage, and symptoms. DMARDs suppress elements of the immune system involved in these autoimmune attacks. Some disease-modifying lupus medications are considered maintenance treatments, taken long-term to help prevent disease flares and slow the progression of lupus damage. Some DMARDs may be taken only during disease flares.

There are several different types of disease-modifying medications for lupus. Antimalarials, which include Plaquenil (Hydroxychloroquine) and Aralen (Chloroquine), are one of the oldest classes of drugs used to treat lupus, and they are still used widely today. Antimalarials are taken by mouth. Cytoxan (Cyclophosphamide) is a chemotherapy drug for cancer. It is administered intravenously. Cytoxan is most likely to be prescribed in cases of lung or kidney involvement. Immunosuppressants prescribed for lupus include Imuran (Azathioprine), Methotrexate, and Myfortic (Mycophenolic acid).

Biologics are a newer class of drug available for treating lupus. Biologics are genetically engineered antibodies, or proteins used by the immune system to identify and neutralize substances. Benlysta (Belimumab) was approved in 2011 by the Food and Drug Administration (FDA), making it the first new drug approved to treat lupus in more than 50 years. Benlysta can be self-injected at home or administered as an intravenous infusion. Rituxan (Rituximab) is another biologic. Rituxan is used off-label to treat lupus and is given as an intravenous infusion.

Since DMARDs suppress aspects of the immune system, many of these lupus treatments can increase your risk for contracting infections. Each DMARD has specific side effects and different levels of risk. Your doctor can help you understand the benefits and risks of each lupus medication based on your medical history and individual condition.

Corticosteroids such as Prednisone, Dexamethasone, Methylprednisolone, and the closely related drug Acthar Gel can help suppress disease activity during acute flares or in cases of severe kidney or central nervous system (CNS - brain and spine) involvement. Corticosteroids, also called steroids, are powerful medications that suppress immune activity and relieve inflammation. Corticosteroids may be administered intravenously or taken orally. In cases of lupus rash, topical corticosteroid creams may also be prescribed.

Taken for short periods of time, corticosteroids are safe and effective. However, taken long-term, corticosteroids can cause serious side effects including osteoporosis, cataracts, and serious metabolic disorders such as diabetes and Cushing syndrome.

Lupus can cause a wide array of symptoms. Some lupus symptoms can become severe enough to be life-threatening, while others can cause disability or lowered quality of life. Symptom management medications can help manage some lupus symptoms, but unlike DMARDs, they do not treat the underlying disease.

About half of those with lupus have proteins called antiphospholipid antibodies (also called lupus anticoagulant) in their blood that promote the formation of thromboses (dangerous blood clots inside the blood vessels). Many people with lupus take anticoagulants, or blood thinners, such as Coumadin (Warfarin) and Liquaemin (Heparin) to help prevent thromboses. Aspirin is also taken as a blood thinner.

Approximately 25 to 30 percent of people with lupus have hypertension (high blood pressure) due to the disease or side effects of medications. Hypertension silently damages organs and raises the risk for stroke and heart attack. Many people with lupus take antihypertensive drugs, of which there are a number of classes. Diuretics (water pills) such as Lasix (Furosemide), angiotensin-converting enzyme (ACE) inhibitors such as Lotensin (Benazepril), calcium channel blockers such as Verapamil, and beta blockers such as Metaprolol are just a few examples of antihypertensive drugs.

Antidepressants such as Celexa (Citalopram), Cymbalta (Duloxetine), Prozac (Fluoxetine), and Zoloft (Sertraline) can address depression in people with lupus, and certain antidepressants have been shown to relieve fatigue or neuropathic pain.

In cases where lupus affects the CNS, it can cause seizures. Some people with CNS lupus take anticonvulsive medication such as Lyrica (Pregabalin) or Neurontin (Gabapentin).

If NSAIDs fail to relieve pain caused by lupus, opioids such as Codeine, Ultram (Tramadol), and Percocet (Oxycodone/Acetaminophen) may be needed. Opioids are believed to work on the brain by altering the body’s ability to perceive pain. According to the National Institute on Drug Abuse, regular use of opioids – even as prescribed by a doctor – can lead to dependence. If misused, opioids can cause overdose and death.

Some people with lupus prefer to try natural treatments and report relief from certain symptoms when they use complementary or alternative treatments such as medical cannabis, dietary supplements, or acupuncture.

Is There a Cure for Lupus?

Currently, there is no cure for lupus. The good news is that while lupus is not currently curable, the prognosis for people with lupus is better than ever. Before modern treatments for lupus, less than 50 percent of people lived for five years after being diagnosed. Now the five-year survival rate is 95 percent, and the majority of people with lupus live a normal average lifespan.

Like everyone else, people with lupus feel their best when they consistently eat a healthy, balanced diet. Most physicians who specialize in lupus recommend the same low-fat, high-fiber diet recommended by the American Cancer Society and American Heart Association. A balanced, nutritious diet can also help you maintain a healthy weight and lower your risk for developing dangerous chronic conditions such as diabetes, osteoporosis, and heart disease.

Some people with lupus feel better when they follow popular anti-inflammatory diets, but no clinical studies have been done yet to prove the benefit of this approach.

Certain foods have been shown to exacerbate lupus symptoms. These include garlic, which may strengthen the immune system, and alfalfa sprouts, which contain a protein that may promote inflammation. Drinking alcohol can make some medications less effective and interact with other drugs (including NSAIDs) in a dangerous way. Those with hypertension should minimize their salt intake to avoid serious complications.

Some people with lupus may benefit from dietary supplements if they are low on certain nutrients. For instance, doctors may recommend that those with osteoporosis increase their intake of calcium and vitamin D.

Kelly Crumrin is a senior editor at MyHealthTeams and leads the creation of content that educates and empowers people with chronic illnesses. Learn more about her here.

You're in! Thanks for subscribing!

posted about 1 month ago

Depression and Lupus: What’s the Connection?

Depression is a common symptom of systemic lupus erythematosus (SLE) — an inflammatory autoimmune...

Depression and Lupus: What’s the Connection?

Most people would like to get more — and higher-quality — sleep, but you may not have to join a...

Most people would like to get more — and higher-quality — sleep, but you may not have to join a...
read article >

Creating new lifestyle habits can be daunting — but it doesn’t have to be. If you’re living with...

Creating new lifestyle habits can be daunting — but it doesn’t have to be. If you’re living with...
read article >

To determine how you can reduce your medical expenses, MyLupusTeam sat down with Susan Null of...

To determine how you can reduce your medical expenses, MyLupusTeam sat down with Susan Null of...
read article >

Live Q&A: Shattering the Stigma Around Migraine With Dr. Starling

Living with lupus can come with a variety of symptoms, and sometimes that includes experiencing...

Live Q&A: Shattering the Stigma Around Migraine With Dr. Starling

Living with lupus can come with a variety of symptoms, and sometimes that includes experiencing...
read article >

How Lupus Can Affect Your Mental Health

Because the physical impact of lupus can be all-consuming, you may be dealing with psychological...

How Lupus Can Affect Your Mental Health

Because the physical impact of lupus can be all-consuming, you may be dealing with psychological...
read article >

The main types of lupus are categorized by the primary signs and symptoms in each case. In lupus,...

The main types of lupus are categorized by the primary signs and symptoms in each case. In lupus,...
read article >

The cause of lupus is unknown. Scientists have proven that lupus is autoimmune in origin – in...

The cause of lupus is unknown. Scientists have proven that lupus is autoimmune in origin – in...
read article >

Guided Stretching and Exercises for Joint Pain With Dr. Navarro-Millán

People with lupus often face such symptoms as pain and stiffness, and the thought of exercising...

Guided Stretching and Exercises for Joint Pain With Dr. Navarro-Millán

People with lupus often face such symptoms as pain and stiffness, and the thought of exercising...
read article >

When you’re dealing with pain, stiffness, and other symptoms of a chronic condition like lupus,...

When you’re dealing with pain, stiffness, and other symptoms of a chronic condition like lupus,...
read article >

Thank you for signing up.

© 2021 MyHealthTeams. All rights reserved.
MyLupusTeam is not a medical referral site and does not recommend or endorse any particular Provider or medical treatment.
No information on MyLupusTeam should be construed as medical and/or health advice.